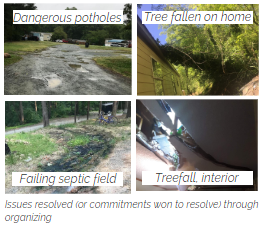 Over 50 Justice United members supported neighborhood leaders from Mobile Home Park B during their negotiations with the park owner.

We have great news! Neighborhood leaders won commitments from the owner to forgive all arrears and debts for residents: a total value of at least $30,000! The debts had accumulated from inadequate park management and miscommunication.

Before Thursday's negotiation neighborhood leaders had identified debt forgiveness as their top priority. They're now celebrating this big win!! Many thanks to the JU members who demonstrated our power to the owner and helped set the tone for building a public relationship.

This win comes in the context of big changes for the park. The owner has accepted an offer of $1.1 million to sell the park to an out-of-state company, and plans to close within the month. Neighborhood leaders had pushed hard for the debt forgiveness issue since it was one commitment the owner could control, even with the sale imminent.

If the park sale closes as planned, leaders will continue organizing to build a public relationship with the new owners. They'll also continue pushing for trash service, improved water, and more responsive office management. The current owner has guaranteed that his commitment to build a new well will carry over to the new owners, so the leaders will also be holding the new company accountable for well construction.

More soon! In the meantime, many thanks again for standing with the residents of Mobile Home Park B as they negotiated this victory!

Progress at Mobile Home Park A!

There is good progress to report.

Below we've detailed how the owners reacted to each of four resident-led proposals.

For next steps, residents will hold the owners accountable for their commitments and will develop a strategy to increase pressure behind the proposals where they didn’t win a full commitment.

We will update Justice United leaders regularly to report on progress and future actions with Mobile Home Park A. We know it was challenging and angering for many on the call to hear executives from a multi-million-dollar capital investment company dismiss the residents' descriptions of financial difficulty during COVID-19. We're going to keep organizing!

Your solidarity has already been a source of encouragement for the residents. They frequently remind each other that Justice United members will be standing with them. Thank you again for your support!

Reaction: NO. Executive explained that the company is prioritizing shareholders' earnings. He did, however, agree to another conversation about the rent.

Reaction: YES. The owner will assess the failing areas and begin repairs within the month.

Proposal 3: Remove hazardous and fallen trees, and commit to regular tree inspection to prevent trees from crushing residents' property (which has happened in the past).

Reaction: YES. Owner committed to assessing trees within 2-4 weeks, and tree removal in the fall.

Proposal 4: Pave the pothole-ridden roads, which have caused accidents, are dangerous in wet/snowy weather, and require expensive car repairs.

Reaction: PARTIAL YES. Owner committed to adding new gravel and improved maintenance, but said paving would be too expensive for the company at this time.

Additional win: The owner agreed to meet again with the residents within the month to report progress on commitments and continue negotiations.
Do you like this post?
Tweet
Calendar Actions